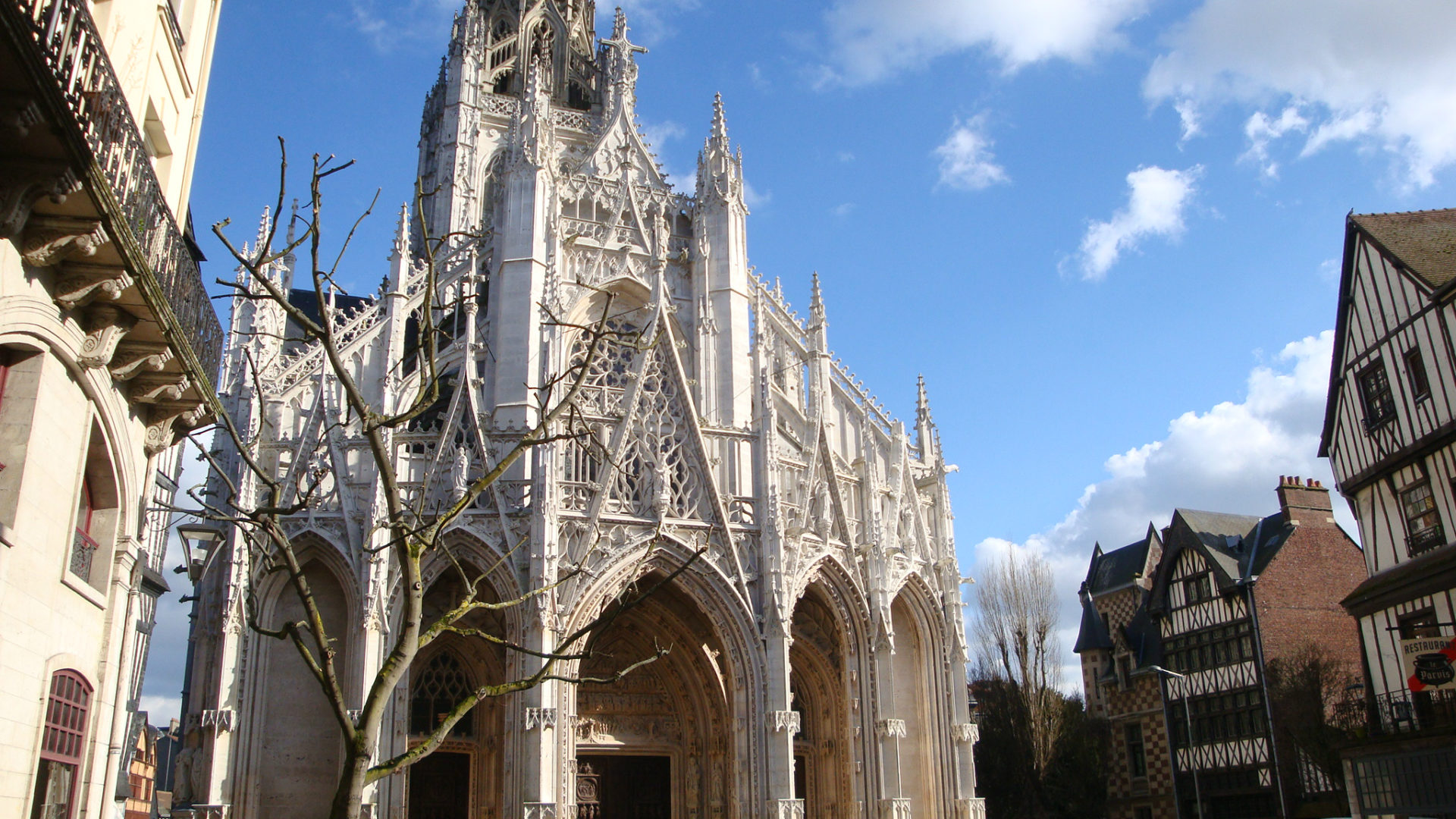 Saint-Maclou Church is a Catholic place of worship in downtown Rouen.

The church is a jewel of flamboyant Gothic art built between 1437 and 1517. It has a west façade in which a rose window opens. In front of this facade is a porch with five bays arranged in a circular arc, surmounted by openwork gables. The three central bays house three portals, two of which are adorned with carved wooden doors, the work of huchiers (cabinet makers, wood carvers) of the Renaissance. The main portal is adorned with scenes of the resurrection of the dead in its vaults and a Last Judgement on its tympanum. At the corner of rue Martainville and rue Damiette, the porch supports a fountain.

The plan of the church has a transept that does not protrude from the side chapels. Saint-Maclou retains the Norman tradition of the lantern tower like Notre-Dame Cathedral, but in addition, it serves as a bell tower. The 83 m spire that surmounts it dates from the 19th century and is the work of the architect Jacques-Eugène Barthélémy. The ambulatory does not have a chapel on the axis and the choir has a four-sided apse whose particularity is to present a pillar in the axis of the building as in the contemporary Notre-Dame de Caudebec-en-Caux church.

The sacristy to the east of the building is a Neo-Renaissance pastiche, with authentic marble columns from Italy.

The church suffered much damage during the Second World War with the fall of two bombs in 1944 resulting in destruction and fire. In addition, it suffered from the vagaries of the climate and pollution.

The interior of the sanctuary is designed to collect the maximum amount of light and is therefore very bright. This is one of the reasons why we note the absence of capitals on the pillars of the nave and choir, we also notice the large size of the bays that occupy all the space between the bays. The choir, which has been extensively renovated, has not recovered its beautiful pre-war Baroque woodwork and only one chapel has retained some of it. The 18th century rood beam that separates the choir from the nave has been preserved. One of the chapels to the south of the ambulatory has not been rebuilt after the war.

Few ancient stained glass windows have survived and those that can be seen are often mixed with modern elements. Of note, however, is the fifteenth-century Jesse tree above the north portal, with a Jesse seated according to a custom born in Flanders, and above the south portal, a Crucifixion.

On the reverse side of the western facade, there is a Renaissance organ, whose qualities of both plasticity and sound are well known. Its case is by Nicolas Castille.

In June 1944, bombs fell from the vaults of the ambulatory and the choir. The bell tower or lantern tower threatened to collapse. The church was partially restored in 1965 and the church was partially restored in 1965. The choir was restored in 2000 and the lantern tower was re-inaugurated on 23 June 2007. In 2008, the city of Rouen signed one of the very first “Heritage Plan” with the State, the Region and the Department, amounting to more than 7 million Euros, for work deemed essential and constantly postponed.

The work, which began in September 2011 and must be completed by the end of 2013, will treat all the upper parts of the roofing, the façade of the north transept and the entire west façade, thus remedying the unfortunate use of poor quality stone more than 150 years ago and the consequences that still arise today. The entire south façade remains to be treated, including the reconstruction of the Chapel of St Clotilde, which has been pending since 1944.