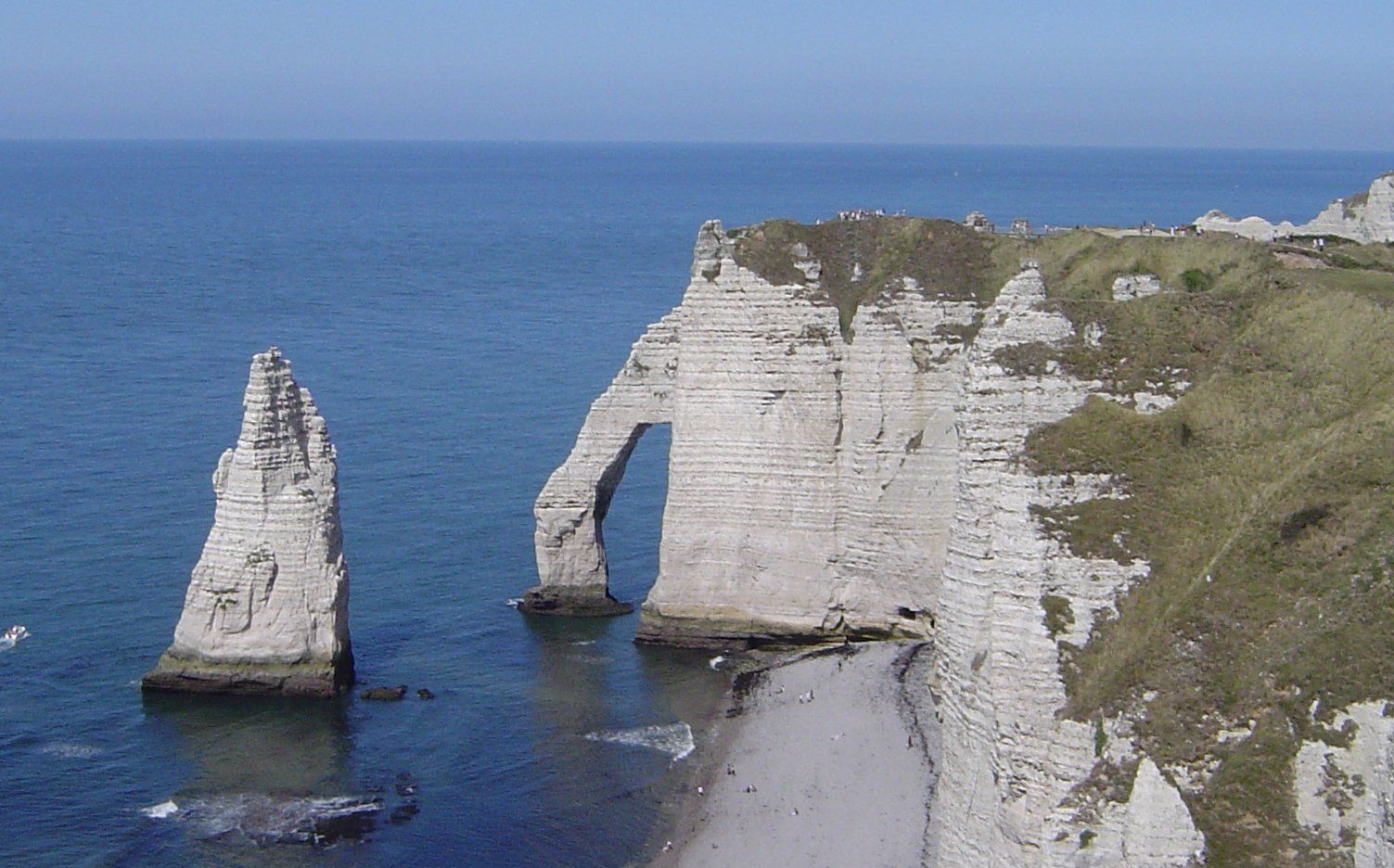 Étretat is a French commune located in the department of Seine-Maritime in Normandy.

Once a modest fishing village, Étretat became a renowned seaside resort in the 19th century. Guy de Maupassant organizes there festivals which make history. This village is located north of Le Havre, on the Channel coast, on the Alabaster coast which is part of the Caux country. The extraordinary and monumental aspect of its almost immaculate white chalk cliffs and its greyish pebble beaches have made it one of the places of international tourism. Painters such as Gustave Courbet, Eugène Boudin or Claude Monet contributed to its publicity, while immortalizing its specificity. Writers such as Maupassant and Gustave Flaubert are faithful followers of the place. Maurice Leblanc, who lived there, contributed to the myth surrounding the site maintained in an adventure by Arsène Lupin entitled L’Aiguille creuse.

The cliffs of Etretat are made of Cretaceous limestone, that is to say, for the most part, white flint chalk from the Senonian1, more precisely from the Turonian to the Coniacian. There are no other minerals, contrary to what can be observed elsewhere on the same Cauchois coastline (e.g. sandstone in the north of the Seine-Maritime department, near Dieppe), nor Jurassic oolitic limestone such as the more yellow-coloured limestone of the Calvados cliffs. We can therefore only distinguish the regular flint strata, which explains the presence of pebbles on the beach. Indeed, following the collapse of sections of cliff, limestone and flint are in contact with sea water which dissolves the limestone and the action of the waves polishes the flint into pebbles.

Further east, Fécamp has some of the highest limestone cliffs of this type, with 105 m at Cap Fagnet and 120 m at the top of the Côte de la Vierge, compared to a maximum of 75 m on the downstream side and a maximum of 84 m on the upstream side at Étretat. At the foot of the cliffs, there is the presence of scree that comes from the fall of whole sections of rock. Rainwater infiltrates the porous chalk and the action of frost can then add to this destructive phenomenon. In comparison, the action of the sea is less, although its responsibility is also established in the process of destruction of the cliffs, as it erodes the base of the cliffs by making undercutting notches. In other words, “the most active agents of erosion are more continental than marine. This is what makes it possible to understand the frequent landslides along the Seine Valley, which obviously owe nothing to the sea. »

The existence of three successive arches: the Upstream Gate, the Downstream Gate and the Manneporte is not originally linked to marine erosion, but to the action of an underground river parallel to the beach which dug its bed into the cliff before the cliff’s non-uniform retreat, materialised by three capes. The erosion on these capes, weakened by the internal conduit of the river, would be at the origin of the three arches, which in turn would have eroded more or less completely. A second underground river would be at the origin of a second series of arches, one of which has only its floor collapsed (the others have completely disappeared). The pillar of the arch would thus correspond to the “needle” of a harder limestone which prevented its definitive dissolution, hence this extraordinary creation of nature. Then, the sea would have widened the arches, giving the site the appearance we know today. Another hypothesis, on the contrary, emphasises differential erosion by the sea, which would be linked to the hardness characteristics of the local chalk in the tidal swing zone.